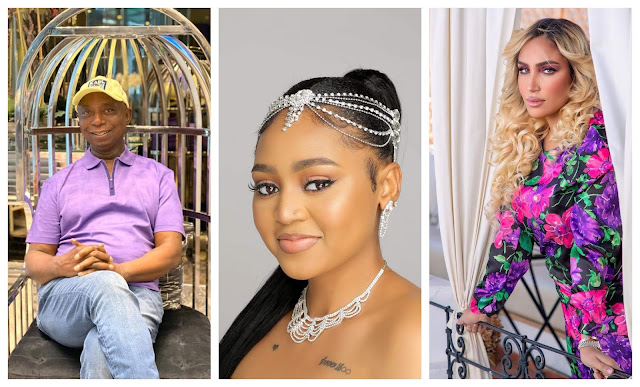 Nollywood actress, Regina Daniels and her siblings has been dragged on social media over the crashed marriage of Laila and Ned Nwoko.

According to an Instagram blogger, Cutie_juls, It revealed that Laila faced alot of difficult time in the marriage before she called for divorce.

Elizabethblog recalls that Ned Nwoko took to his Instagram page to realease an official statement Involving his divorce with laila.

In the statement that was released, Ned Nwoko allged that Laila spent the money he gave her to take her kids abroad on herself after undergoing a plastic Surgery.

Not Only that, He also said laila is an aggressive person as she exposes her children in an Indecent manner which a responsible man will not tolerate.

Reacting to the post, The blogger disclosed that Laila reported the issue to Ned Nwoko concerning Regina Daniels and her siblings who made life an hell for her.

It’s so unfair what this lady went through and Ned, his most current wife and team are doing so much to paint her like a bad woman so he can have full custody of their kids.

Ned, abused the rights of the women in his life by making them swear an oath via rituals that if they should cheat or remarry even after divorce, tragedy will befall them bla bla bla. But on the flip side, he is at liberty to date, marry and do whatever he likes with his gbola and love life. This is so unfair.

Laila will be in the house and all communications between herself and her husband will be in English so everyone present understands what they are saying. But in her present, Ned and Gina will change language. Regina’s mom and especially brothers will come around and when they see Laila pass, they will say stuff in a language she doesn’t understand and then start laughing and giving her funny looks. She cried to herself and her husband severally but nothing was done about the whole ish rather than “oh they/we weren’t talking about you”

Come on, we’ve all kind of experience such one way or the other and we know how it feels when you walk into a group of people and they suddenly start speaking in languages you don’t understand and then starts making suspicious body languages. This is so unfair. Emotional abuse at its peak.We are not here to tell a grown man how to run his home but with all due respect, Pa Ned should know that being in a polygamous marriage means you owe it as a duty to treat all women fairly. If Laila chooses to bring up the issue of cheating in the divorce proceedings, she wouldn’t be far from right cuz he was seeing Gina as his concubine before he eventually married after she got pregnant which she unfortunately lost that very pregnancy then later God Almighty blessed them with a son.

Pa Ned is a lawyer and he should know better